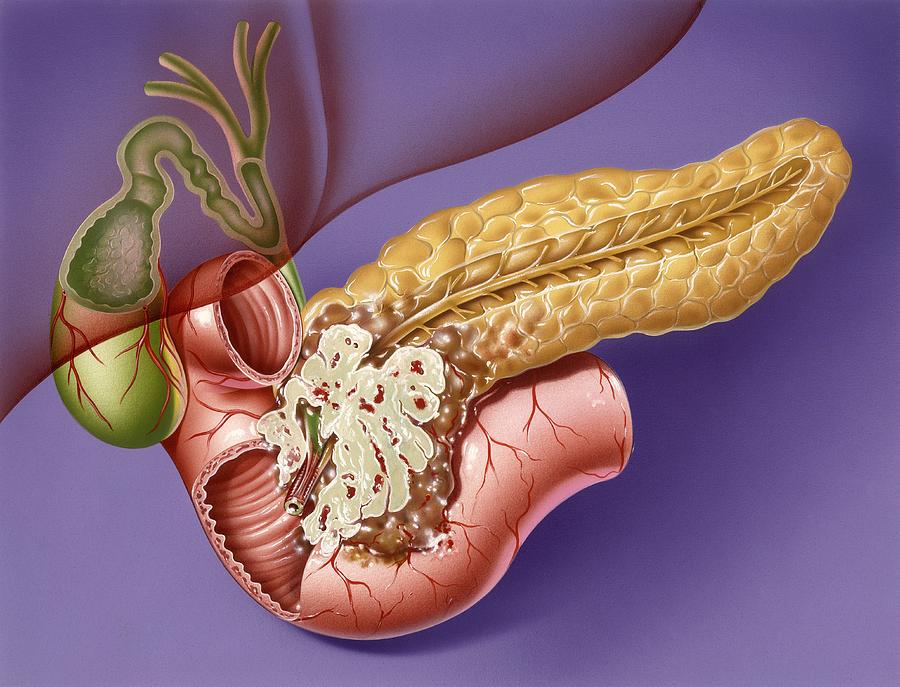 The pancreas is a unique organ that produces not only digestive enzymes, but also a number of vital hormones. Unfortunately, pancreatic lesions are rarely detected early. A latent, asymptomatic course leads to a progression of the process and a serious condition of patients. Such a tumor is relatively rare, but its course is rapid and destructive for the whole organism. That is why it is important to quickly identify the oncological process and take action as soon as possible! 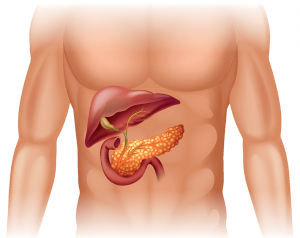 Alcohol, tobacco abuse, excessive consumption of fatty and fried foods – all this can be a trigger for the development of pancreatic cancer. Patients with long-term diabetes mellitus, chronic pancreatitis and cholelithiasis are at risk.

The most common symptom is pain. It can be of a shingles character, radiate to the lumbar spine, or it can be localized in the right hypochondrium. They are intense, painful in nature.
The skin begins to acquire an icteric tint
Feces with a greasy, greasy sheen. Sometimes the stool becomes yellowish-white, indicating that the biliary tract is blocked.
Nausea, vomiting, diarrhea
A sharp decrease in weight without objective reasons
All these symptoms appear at a far advanced stage of tumor development. In the early stages, pancreatic cancer is very difficult to suspect. Usually, a tumor is discovered by chance during an ultrasound examination of the abdominal organs or computed tomography. The nature of the process can be established only after a biopsy.

What could be pancreatic cancer?

With its dual function, the pancreas becomes a special cancer target. Its exocrine part – producing bile and endocrine – producing hormones can be damaged. Depending on the localization of the process, there will be a different clinical picture, in some cases even mimicking diabetes mellitus.

1. At the first stage, pancreatic cancer does not give any clinical symptoms. The patient usually does not know that his pancreas is affected. The tumor is small and does not extend beyond the organ.

2. The second stage is characterized by the penetration of malignant cells into nearby organs and the lymph nodes surrounding the pancreas

3. At the third stage, the process progresses, growing into the stomach, blood vessels, spleen and other organs. 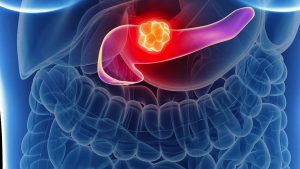 4. The fourth, most severe stage is characterized by the appearance of distant metastases.

The approach to pancreatic cancer therapy must be proactive. Of course, a positive result is achieved in a smaller percentage of cases than doctors would like. However, one should not give up. Under the strict supervision of specialists, pancreatic neoplasms can be fought in the following ways:

Surgery https://en.wikipedia.org/wiki/Surgery is performed in a small percentage of cases. To perform the operation, the tumor must be at a stage no later than the third, located on the head of the pancreas and not adjacent to the vessels. The operation itself requires high skill of the surgeon and is not suitable for everyone.
Chemotherapy and radiation therapy are used in conjunction with surgery. Due to the toxic effect of these methods, the tumor slows down its development. However, this aggressive treatment does not go unnoticed on healthy cells. As a result, there are a lot of serious complications that every patient should be aware of.
Photodynamic therapy is a relatively new treatment. Its essence lies in the use of photosensitizer preparations that accumulate in cells affected by cancer. Under the influence of a light source of a certain wavelength, the drug breaks down, releasing substances that destroy tumor cells.